The first edition of the international conference on textile and clothing sector, organised by CITEVE – Portuguese Textile and Clothing Industries’ Technological Centre, has taken place in Oporto, during the 13th and 14th of February.

The conference was part of the Oporto fashion Week where experts of the industry 4.0, products’ and processes’ digitalization and dematerialization, new materials and advanced used of natural fibres, new structural techniques, electronic and smart textiles, sustainability and circular economy, were present.

The iTechStyle Summit event has played as a relevant platform to debate and reflect about scientific and technological knowledge by engaging innovative players from the industry, technology suppliers, researchers, scientists and other agents connected to the textile and clothing sector around the globe. 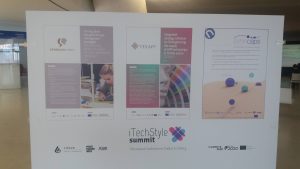 On February 15th and 16th, for the second time, Francisco Sá Carneiro Airport has hosted the only textile industry event at national level in Portugal. The 49th edition of Modtissimo set records in the number of foreign buyers present and the satisfaction index of more than two hundred exhibitors with about 400 collections on display. Around 6,500 visitors were present during the two days, from which 15% were international, from several parts of the world.

Sparks from the 2nd transnational meeting in Austria!

Sparks from the 2nd transnational meeting in Austria!

This project has been funded with support from the European Commission. This publication [communication] reflects the views only of the author, and the Commission cannot be held responsible for any use which may be made of the information contained therein.
Project Nº.: 2016-1-PT01-KA204-022852

By understanding that the use of your personal data requires your confidence, we follow the current regulations and the appropriate procedures in the treatment and data protection. Read More